Many of the Christmas holiday traditions Americans honor in the early 21st century were shaped in the 19th century as this image from an issue of Harper’s Weekly in January 1869 reflects.

Christmas in the United States is not only a federal holiday but arguably the most celebrated holiday in the country, as evidenced by more retail and holiday decoration sales devoted to it than any other holiday during the year. However America’s celebration of this holiday has not always been universal and indeed, its traditions as celebrated in the United States are much more recent than most Americans likely are aware of, with most present day variations of American holiday traditions descended from the 19th century Victorian era. This was also the main time period Fort Mackinac was in active use as a military garrison and this heritage of holiday traditions is also reflected in the history of the fort and local inhabitants.

From the very beginning of European American history, Christmas traditions were more a reflection of the culturally diverse European groups but restricted to the specific geographic regions inhabited by each group, without the blending of traditions and customs that would later follow. New Englanders, for example, who represented a largely Puritan background tended to abstain from any Christmas festivities which they saw as a carry-over from what they perceived as the corrupted Church of England and Roman Catholic Church. Southerners, on the other hand, whose culture was heavily influenced by the royalist culture of England, carried out multi-day celebrations in what was considered a replication of that heritage. However, as the United States began to gradually form a national identity throughout the 19th century, Christmas traditions gradually began to form a collective national arc as well. This trend coincided with a growing cultural diversity in the country through immigration, physical growth (both through westward and urban expansion), and concerns over regional sectionalism within the country. These changes brought forth a sense of yearning for imagined simpler times as well as a desire for more unified national traditions, all of which shaped the evolution of Christmas in America. 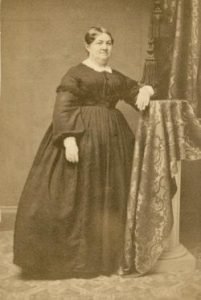 By the beginning of the 19th century and Victorian era, many American Christmas customs that Americans in the early 21st century are familiar with, had begun to take shape. These included sending Christmas cards, decoration of evergreen Christmas trees in the house, singing of Christmas carols in public settings, cooking large meals to host gatherings for family and friends (not only for Christmas day but New Year’s Day as well) and the emergence of the uniquely American version of Santa Claus who made his first appearance in the 1822 poem, “A Visit From St. Nicholas” by Clement Moore and the first documented store front Santa impersonator in Philadelphia in 1849. Christmas even crossed sectional lines between North and South during America’s Civil War which was reflected in commemorations of the holiday by both sides during the war. National publications such as Godey’s Lady’s Book and Harper’s Weekly all contributed to how Americans perceived American Christmas traditions that carried over from the mid to late 19th century and created an American Christmas cultural identity. 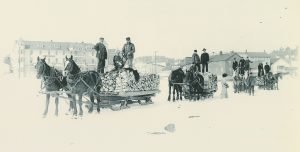 These horse drawn carts are examples of the kind that would have been relied on to transport various foods from the mainland to supply holiday meals for island residents.

These national trends could be seen in microcosm both among the civilian and military communities that inhabited Mackinac Island. The importance of a large Christmas dinner is probably the most consistent observation of the holiday commemoration on the island, despite how isolated it could be during the winter months. In 1823, island town resident Elizabeth Baird recalled a Christmas meal of roast pig, roast goose, chicken pie, round beef, sausage, headcheese, small fruit preserves and cake. This was followed by spending time with family in prayer, song and gift giving. Similar patterns of holiday tradition could be observed sixty years later within the community of Fort Mackinac. An 1883 military commissary order of chicken, duck and turkey reflects what the troops could expect for holiday meals which were shipped by rail to Mackinaw City on the mainland, before being transported across the ice on horse drawn cart. Harold Dunbar Corbusier, the child of an Army surgeon stationed at Fort Mackinac between 1883 and 1884 gave insight into very similar traditions as those described by Elizabeth Baird in 1823. In his journal entry for 25 December 1883 Corbusier recounts that “We had a Christmas tree this morning. … I received the ‘Theatre Royal.’ A knife, the Calendar of American History and several other little preasants.” all of which reflect traditions that most Americans are familiar with in their own holiday celebrations in the early 21st century. Corbusier also recorded on New Year’s Day his family hosted a dinner and at least one friend to partake in it with them, yet another example of the holiday tradition of celebrating the New Year as well. 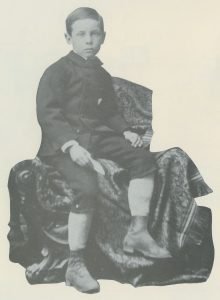 Harold Corbusier recalled celebrating Christmas and the New Year at Fort Mackinac in 1883-84 with familiar holiday traditions of an indoor Christmas tree, presents and dining with family and friends.

As the end of 2019 draws to a close and the New Year of 2020 approaches, it is a good time to reflect on the reality that the world of the present does not exist within in a vacuum of time but in fact is shaped by the events of the past. The traditions of Christmas and New Year festivities including those commemorated by past generations on Mackinac Island serve as an example of this reality and provides a reassuring reflection of how the origins of American Christmas traditions are rooted in a uniquely American past which still reaches out and touches the present in a deeply meaningful celebration of life with family and friends.

A Song For New Year’s Eve:

The fire-light glows upon the hearth;

To-night the New Year has its birth,

So fill your glasses to your rim,

An let us say farewell to him!

(Excerpt from “A Song For New-Year’s Eve”,