When you visit Colonial Michilimackinac in 2022, if you look in the right place you’ll see a newly-reconstructed building. It’s small and very humble, and is located behind the Commanding Officer’s House. Up against the palisade, you’ll find a privy! While the privy is by no means the largest building at Michilimackinac, it’s the first reconstruction added to the site since 2013, when the South Southwest Rowhouse was completed. More importantly, our new privy helps us better recreate and interpret Michilimackinac as it appeared in the 1770s. 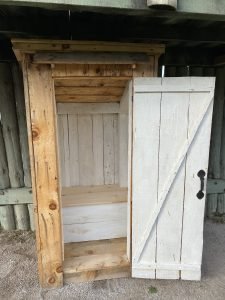 Our reconstructed privy is located in the same spot as an original structure associated with the Commanding Officer’s House. Ruins of the original privy were discovered during work on the palisade wall in June 1985. Although not formally excavated, archaeologists noted the privy’s location and retrieved a few artifacts, some of which are currently on display inside the Commanding Officer’s House. The remains of the privy were reburied and remain largely undisturbed.

In 2021, interpretive staff members decided to rebuild the privy as a season-long demonstration project. The wood for the privy was hewn and sawed at Historic Mill Creek Discovery Park, where millwright interpreters assembled the framing timbers. Dimensions and construction details were copied from another 18th century privy located near the powder magazine, which was fully excavated and documented by archaeologists in 1978-79. The framing timbers and lumber were brought to Michilimackinac in August and assembled onsite by staff and volunteers during our Askin’s Men and Women special event. Finishing touches, including the seat and cedar shingles, were added soon after, and our interpretive staff moved the completed structure to the location of the original privy behind the Commanding Officer’s House. 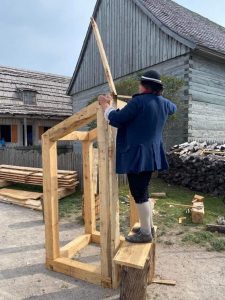 Although it isn’t very large, the new privy helps us interpret 18th century health and hygiene at Michilimackinac. Archaeologists have discovered remains of other privies around the fort, including near the powder magazine and behind the Southwest Rowhouse, but only the military latrine in the northwest corner of the fort had been reconstructed prior to the addition of the new privy. While not every house had an associated privy in the 18th century, they would have been a common sight at Michilimackinac. 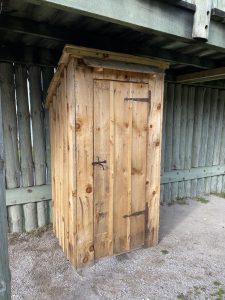 The privy is just one part of our ongoing efforts to reconstruct Michilimackinac, which began over 60 years ago. In the next few years you will likely be able to visit a much larger reconstructed building. Mackinac Associates, our friends group, has generously funded design work for an additional house unit of the Southwest Rowhouse. Rebuilding the house will provide additional interpretive or exhibit space and will better represent the rowhouse at it appeared in the 1770s (this house unit was excavated archaeologically in the 1960s, but not rebuilt). If you would like to support future reconstruction efforts, please consider joining or making a donation to Mackinac Associates, and we hope you’ll visit us at Colonial Michilimackinac to see what’s happening next!