Friedrich von Germann sketched this British soldier dressed for the Canadian winter in 1778.

When the men of the 8th Regiment arrived at Michilimackinac in 1774, they, like the rest of the British army posted in Canada, found themselves in a remote wilderness with pleasant, temperate summers and harsh, bitter winters. The Canadian winter climate was significantly cooler than what most soldiers were accustomed to in Britain. Fortunately, several uniform pieces allowed these men to live and even fight in the coldest of Canadian winters. 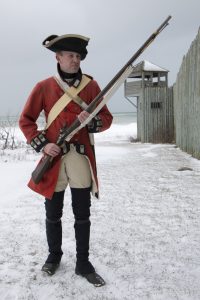 With the lapels buttoned over, collar turned up, and tails let down, a soldier’s regimental coat helped protect him from the cold. Blue wool leggings further protected his legs.

At the most basic, every British soldier around the world wore simple cold weather gear as part of their everyday uniform. Their red regimental coats included a number of features to protect soldiers from cold and damp. The long tails, typically hooked or even sewn back to reveal a soldier’s legs, could be let down to form a warm skirt. The cuffs could be rolled down over the hands, while the falling collar could be turned up to protect the neck. Finally, the lapels could be buttoned over to fully close the front of the coat, which was typically held together by only hooks and eyes. These alterations transformed the regimental coat into something akin to a modern trench coat, and soldiers were unofficially encourage to use old uniform parts to sew wool caps with falling capes to complete their cold weather gear. 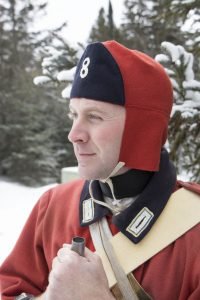 Unfortunately, while the regimental coat was adequate to protect soldiers from the milder climate of Great Britain, it could not possibly be enough to keep a soldier alive in Canada. As a result, in the mid-1770s the army in Canada adopted several more cold weather uniform pieces, many of which were copied from local French-Canadian and Native American clothing. Soldiers were issued leggings or high-waisted overalls, typically of blue wool, to protect their legs from deep snow. Over their uniforms, soldiers wore heavy Canadian capots, or blanket coats, which included large, wool-lined hoods. The men stored their traditional cocked hats in favor of wool caps or fur-lined “Canadian caps.” To ensure their mobility, many soldiers were even trained in the use of snowshoes.

Thanks to these adaptations, the soldiers at Michilimackinac and other Canadian posts could endure blowing, drifting snow and freezing temperatures.