Métis culture held a unique place of being part of two cultures, French and American Indian, that became a unique culture itself. This culture came about from the French men of the fur trade coming into the Great Lakes territories, populated by local tribes throughout the region. Families and bonds were made with this interaction. 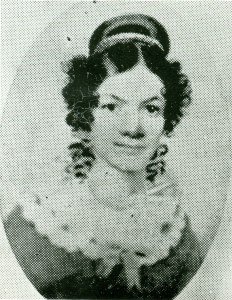 By the 1820s and 30s, the fur trade was at its height on Mackinac Island. John Jacob Astor’s American Fur Company had its headquarters on Market Street. While it held a virtual monopoly on the fur trade, small independent traders held their own and had many successes. The métis culture held one foot in the European American world and one foot in the American Indian world, becoming an integral part of the fur trade as part of the middle ground to interact between these other two cultures.

It is within this atmosphere that a group of métis women rose to prominence in a male dominated world. These women included Elizabeth Mitchell, Jane Schoolcraft, Agatha Biddle and her daughter, Sophia, and Magdelaine LaFramboise. These women held authority positions, led companies, were some of the first people dignitaries visited while on Mackinac, and were respected members of the island society.

Elizabeth Mitchell, and her husband David, lived in the fortified village of Michilimackinac when they were first married. David left the British army as a surgeon and moved to Mackinac Island when the fort and community moved starting in 1780. Elizabeth remained loyal to her husband’s British ties, but also her own family ties with local Odawa. While David fled the island for safety and for loyalty, Elizabeth remained on Mackinac Island to run the farming, fishing and fur trade industries the family was involved with in the area. She has been described as being tall, stout, usually wearing black silk, and sometimes a black beaver felt hat. She and David lived and visited with each other, most of the time they lived separately and she continued to take care of business dealings on the island.

Jane Johnston Schoolcraft lived on Mackinac Island for most of the 1830s and was instrumental in helping to gather, translate, and write many of the native stories on to paper for her husband, Henry. Henry is known for his writings, but Jane has gained a considerable following since her poetry, traditional stories, and songs were not commonly known and not published until just recently. Most are written in English, translated from the Ojibwe language or sometimes written in her native tongue. Jane has become referred to as the first known American Indian literary writer.

Agatha Biddle was described as feeding and caring for the sick and elderly of her community, as well as taking in orphans or children who were in need of a home. She married Edward, an independent fur trade and official within the community. Like many of the merchant class families the Biddle family children were schooled away from home. Sophia, the eldest daughter, became a belle of society in the Wyndotte area, while staying with family for school. Agatha was said to have worn traditional clothing of her tribe. She was made the chief of the Mackinac band (comprised of mostly Anishinaabe tribes) in the mid 1800s.

Magdelaine LaFramboise is probably the most well-known of the group. After her husband Joseph was murdered while on business in the Grand River region, Magdelaine took control of the fur trading company and continued its success. She started the first school on the island, in her home, and encouraged William Ferry to start his mission school and assisted Fr. Mazzuchelli in starting a Catholic school. Her daughter Josephine married a captain at Fort Mackinac, Benjamin Pierce, brother to Franklin Pierce who eventually became a U.S. president. On his famed visit to the United States, Alexis de Tocheville first visited LaFramboise on coming to the island.

Although just a glimpse into their history, these métis women proved to move between the European/American and traditional tribal paths effectively. While still a challenge, they exceeded the traditional roles both communities held for them for the time period.

4 Responses to “Métis Women of Mackinac”