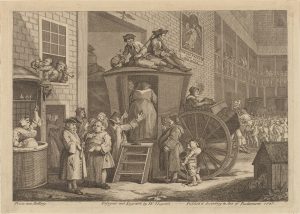 Nearly all European and American men wore felt hats in the 18th century. Hats came in numerous shapes and sizes, as seen in this 1747 engraving by famed illustrator William Hogarth.

For over 200 years, Michilimackinac, and later Mackinac Island, were centers of the Great Lakes fur trade. Every summer, merchants based at Michilimackinac or on the island shipped tons of furs to factories on the Atlantic coast or in Europe. Trapped by indigenous people around the Great Lakes, otter, muskrat, mink, rabbit, fox, and especially beaver pelts were highly prized in the garment and fashion industry. These furs were used to trim collars and cuffs, line capes and muffs, and, most importantly, to make felt hats.

Beaver furs were especially useful for hatmaking. To begin the process, hatters separated the long, straight guard hairs from the more valuable under layer of fur, which is soft and fleecy. The under fur was collected into a mass known as beaver fluff while the guard hairs and the skin itself were discarded. The fur was agitated in order to begin the felting process, and to release dirt and tangles from the fur.  To prevent the fluff from being blow about, the fluff was laid out on a table with holes located in a draft-free room.  Workers then used a hatter’s bow, which resembled a large violin bow, to agitate and clean the fibers. By passing the bow over the fluff and plucking its string, workers caused the individual hairs in the fluff to bond together while forcing dirt to fall through the holes in the table and onto the floor. 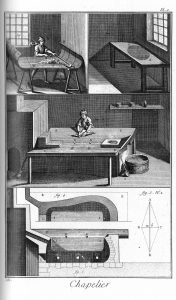 Some of the early stages in the hatmaking process, including the use of the hatter’s bow, are depicted in this mid-18th century engraving from the French Encyclopédie, edited by Denis Diderot.

The resulting product was called a “batt” in English, and “capades” in French. The batts were covered with damp cloth or leather and placed on top of each other over a small heat source.  The heat and moisture encouraged further bonding, condensing, and shrinking of the batts.  The moist batts were layered on top of one another while receiving more heat and moisture to continue the bonding process, and finally rolled out to form a dense felt fabric. Hatters placed the felt blanks onto wooden forms to create the shape of the crown as well as some of the brim. On the form the hat would be shaped, trimmed, ironed into the final product. Beads, ribbons or feathers could all be added to a finished hat once it went on sale in shops around Europe or North America.

This process, so reliant upon a steady supply of beaver and other furs, drove the economy of the Great Lakes for decades. In fact, in many ways the communities in Mackinaw City and on Mackinac Island would not exist today without the demand for furs to make hats!