In the fall of 1911, the railroad ferry Chief Wawatam arrived in the Straits of Mackinac to begin a career which lasted 73 years. The Mackinac Transportation Company built the ship to haul railroad cars between Mackinaw City and St. Ignace. The ship could carry 18-26 cars depending upon their size and unlike previous ferries that worked the straits, the Chief Wawatam was built entirely of steel. Along with freight cars, the ship carried passenger train cars, automobiles, soldiers and passengers. At 338 feet, she was the largest railroad ferry at the straits and served the longest, until 1984. 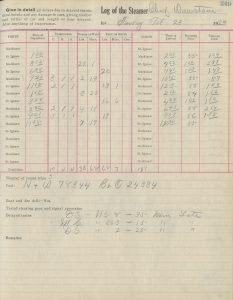 In August 1984, the railroad dock in St. Ignace collapsed and ferry service ended. The ship was tied up and several plans were put forward to reuse the ship including as a restaurant, museum or break wall. Unfortunately, none of these plans came to fruition and the ship was sold to a Canadian company in 1988 for use as a barge. Before this happened, staff from the Mackinac Island State Park Commission were allowed on board to select several pieces of equipment and other items to be saved for a planned transportation museum in St. Ignace. This museum was never constructed so the park commission became the caretaker for several hundred objects and a collection of papers and other archival materials. 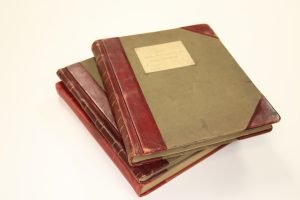 The historical objects from the Chief Wawatam were processed into the collection starting in 1993, however, the archival collection was left unprocessed. In the winter of 2018-2019, Registrar Brian Jaeschke processed the collection of logbooks, maintenance records, company invoices, crew information and other paper items. The logbooks record the many crossings of the straits and the years before and during World War II when the ship was chartered to break ice in several of the Great Lakes. Maintenance records and company invoices attest to the repairs and work done to keep the ship running. Many of the men and women who worked on the “Chief” were from communities on both sides of the straits. Personnel records show that working on the ferries covered several generations of local families. 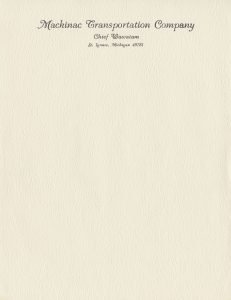 These records and many others are housed in the Dr. Keith R. Widder Library in Mackinaw City and can be used for research, genealogy and other educational purposes. Appointments to use the library must be made at least 24 hours in advance by contacting Jaeschke at JaeschkeB@Michigan.gov or by calling (231) 436-4100.