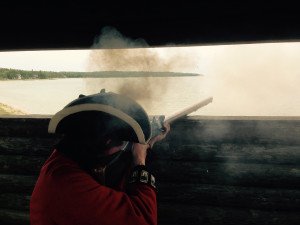 Although it primarily served as a logistical center for the Great Lakes fur trade, the post of Michilimackinac remained a military establishment from the moment it was constructed by French soldiers in 1715 to the day the last British troops abandoned the fort in 1781. Especially during the period of British control (1761-81), Michilimackinac served as an increasingly important and well-defended military outpost.

Although the size of the French and British garrisons varied over the years, each soldier carried a flintlock musket and bayonet. Until the mid-1760s, soldiers of both nations were also issued swords. By the time British troops arrived at Michilimackinac in 1761, they likely carried the .75 caliber Long Land Pattern service musket. Around 1768 these weapons began to be replaced by the slightly smaller and more lightweight Short Land Pattern musket. Both weapons were part of a family of similarly-designed muskets today known as Brown Besses. 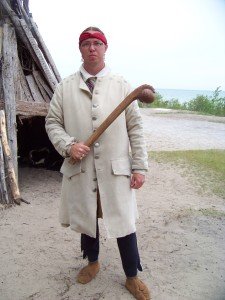 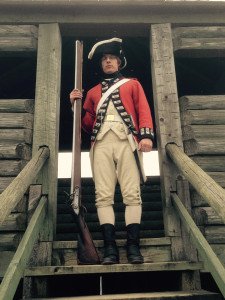 In addition to each soldier’s personal firearms and accoutrements, several larger weapons completed the defenses of Michilimackinac. Ordnance returns from 1778 and 1779 reveal that British soldiers maintained 11 pieces of artillery. The guns of Michilimackinac included two iron 6-pound guns which were most likely mounted on the fort’s walls to protect the gates, as well as two highly mobile brass 6-pound field guns stored on the parade ground. Other weapons included four brass “ambuzetts,” which were small cannons designed to fire a ½-pound ball, although these artillery pieces were worn out and used “for saluting only.” Soldiers also had a 4¼-inch mortar at their disposal, as well as two wall guns. These pieces, which resembled gigantic muskets, served as portable artillery, capable of firing loads of buckshot from positions on the fort’s walls.