French Canadian tales of the supernatural are explored at Fort Fright each year and one of the favorites is the story of the werewolf. It’s quite different from what we may be familiar with today, but for people in the 1700s at Fort Michilimackinac, the idea of a werewolf was no less terrifying. 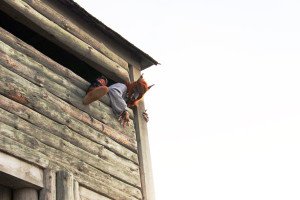 The loup-garou, or werewolf, is a common character in French Canadian folklore. Werewolf legends, a form of shape shifting, are noted in some ancient and medieval European cultures, but are not widely documented before the thirteenth century. They became more common beginning in the 1400s, coinciding with the witchcraft panic. They spread from Eastern Europe and Germany into France and were subsequently brought to New France in the seventeenth century. Folklorists in the late nineteenth and twentieth-century recorded werewolf tales throughout Canada and areas of the United States settled by the French.

The stories of the loup-garou usually involve a person transformed into a wolf for being non-pious, such as failing to meet his religious “Easter duties” (confession and reception of communion at least once a year) for seven years in a row. After the transformation, the werewolf would be forced to wander the countryside alone for a specified length of time, such as 101 days, or the rest of their life. Some legends have the wolf returning to human form by day, though he was sickly and fearful to tell of his predicament. The werewolf could be cured. This usually involved being recognized by someone who had known the wolf in their human form. That individual would then have to draw blood from the wolf in some fashion. Once the cure was completed, neither could speak of the incident or they would be turned into a werewolf. Other stories have the loup-garou attacking humans or working with or under the control of the devil.

While the sinning human would usually be turned into a wolf, they could also take on other forms such as a calf, ox, pig, or cat.

To learn more about this annual event, visit www.mackinacparks.com/fort-fright