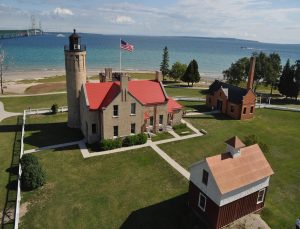 The brick 1906 fog signal building sits just east of the 1892 keepers’ quarters. The 1890 fog signal originally occupied the space between the two buildings, where benches now line the sidewalk.

Today, visitors to Old Mackinac Point Lighthouse enter the site via the Fog Signal Building, constructed in 1906. The machinery originally housed inside powered fog whistles, and later air horns, to guide sailors during periods of poor visibility. The building itself, however, was only constructed after a 13-year legal dispute between the federal government and the Village of Mackinaw City. END_OF_DOCUMENT_TOKEN_TO_BE_REPLACED