“The one constant through all the years, Ray, has been baseball. America has rolled by like an army of steamrollers. It’s been erased like a blackboard, rebuilt, and erased again. But baseball has marked the time. This field, this game, is a part of our past, Ray. It reminds us of all that once was good, and that could be again.  –Terrence Mann – “Field of Dreams”

The large, grassy field behind Fort Mackinac has served many purposes since the end of the Civil War.  It has been a drill field for soldiers, a playground for scouts, and a great place to canter a horse.  But the one constant on that field for nearly a century and a half has been baseball.   Fort Mackinac soldiers established the first ball field on this site in the 1870s and continued to develop and improve the field until the fort closed in 1895.  Local residents and summer workers played baseball at the “fort ball grounds” in the early 20th century.  Since 1934, when Civilian Conservation Corps workers built the nearby scout barracks, boy and girl scout troops from across Michigan have played ball on the same field during the summer months. 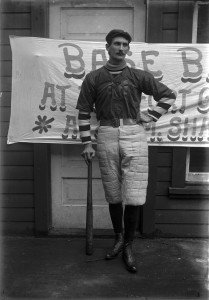 First popular on the East Coast, baseball spread west during the Civil War as Union ball players (“ballists”) shared their favorite game with other soldiers.  The game first appeared on Mackinac Island in 1871 when soldiers from Captain Leslie Smith’s 1st Regiment of Infantry, many of whom were Civil War veterans, received permission to play the game (“match”) in their spare time.  Over the next two decades baseball grew in popularity across the country and, with liberal amounts of free time and officers who encouraged physical fitness, Fort Mackinac soldiers enthusiastically joined in.

Lieutenant Edward Pratt helped form the Fort Mackinac Base Ball Club in 1885.  The thirty-two-year old lieutenant became the team captain and contributed the first four dollars to the club fund that paid for two new bats at forty-cents each and a “League” baseball which cost one-dollar and twenty-five cents.  By mid summer the team had several bats and balls, three bases, a catcher’s mask and a carefully laid out diamond on the large parade ground behind the fort.  With a copy of Spaulding’s Base Ball Guide in hand, Pratt and his men took the field.

The highlight of the 1885 season was a two-game series with the highly-touted Diamond Baseball Club of Cheboygan.  The first game was played in Cheboygan as a part of the city’s Fourth of July celebration.  Most of the fort officers and enlisted men accompanied the team and cheered for the Never Sweats, a nickname for the Fort Mackinac nine.  The fort’s starting lineup featured the strong-armed blacksmith Private Hiram Eddy on the mound with First Sergeant Thomas Hennessey behind the plate.  Corporal William Sconce, one of the regiment’s finest sharpshooters, patrolled left field while club treasurer Corporal Charles Hastings played shortstop.  In a move sure to curry favor with the commandant, the team choose Captain Brady’s seventeen-year-old son Mifflin to play right field.  Fireworks came early to Cheboygan that day as the bats for both teams exploded.  When the dust cleared, the soldiers were victorious, outslugging their opponents seventeen to ten.

Flush with success and the twenty-five dollar prize money, the soldiers invested in new uniforms.  They bought eighteen yards of flannel and paid nearly twenty dollars for tailored suits complete with elastic fittings.  The soldiers proudly wore their new uniforms when the Diamonds traveled to Mackinac Island on August 14 for the rematch.  The Cheboygan team came well prepared to avenge their earlier loss and defeated the soldiers.  In his journal Dr. Bailey remarked that the Cheboygan team had little reason to brag, however, since they “smuggled in three professional players from abroad.”

The fort baseball team continued to flourish while the Twenty-third Infantry was stationed at Mackinac.  Corporal Robert “Tug” Wilson became the team’s official scorer and scheduled games with teams from cities around northern Michigan including Mackinaw City, Sault Ste. Marie, Harbor Springs, Petoskey and Reed City.  Wilson, who served as a part-time reporter for the Cheboygan Democrat, submitted box scores and game summaries to the paper which chronicled the team’s progress throughout the summer months in the late 1880s.  Fort officers continued to support the team and even allowed the men to construct a grand stand capable of seating 500 spectators.  The soldiers charged a twenty-five cent admission to their home games, with seating in the grand stand costing ten cents extra.

This summer the Never Sweats will play a match against the Mackinaw City Boys.  This is a “rematch” of sorts, as the fort soldiers played a team of ballists from Mackinaw City in 1886.  The former game was played on the fort grounds on Monday, July 26, with “Mason of Mackinaw City” serving as umpire.  The score was tied three to three at the end of the first inning but the Never Sweats’ bats exploded after that and by the end of seven innings the Mackinaw City club, who now trailed 23 to 14, threw in the towel “claiming that they had to leave on a boat at 5 o’clock.”  The Boys will have an opportunity to avenge their loss when the teams meet again on July 25, 2015, 129 years later on the same field.